Geopolitics only one factor in rising oil prices

Underlying oil market fundamentals – good ol’ supply and demand – are as bullish as they have been over the past decade, says Pavel Molchanov, Managing Director and Energy Analyst for Raymond James Equity Research.

For our readers with investments in the oil value chain, the fact that oil prices reached fourteen-year highs in the early spring of 2022 helps explain the Energy sector’s outperformance year-to-date, building on its gains from 2021, when it had been the best sector in the S&P 500. On the other hand, the oil market rally is also contributing to the global economy’s inflationary spiral, with consumers as well as businesses feeling the pain of high prices at the fuel pump. Whether we like it or not, high oil prices are here to stay. We forecast that West Texas Intermediate (WTI) crude will average $100/barrel (Bbl.) in 2022, with only a modest cool-off to $90/Bbl. in 2023. For some perspective, as recently as December 2021, WTI was in the low $70s. Brent crude, the global benchmark, should remain a few dollars above WTI.

Geopolitics and the oil market

There is no disputing the fact that geopolitical factors played a major role in the oil market rally of recent months. The prime example is the crisis that culminated in Russia’s invasion of Ukraine. Why does this matter for the oil market? Because Russia produces approximately 11 million barrels per day, or 11% of the world’s oil supply – on par with the U.S. and Saudi Arabia – of which7.5 million barrels per day (bpd) is exported, including 4 million bpd that is sold into European countries. 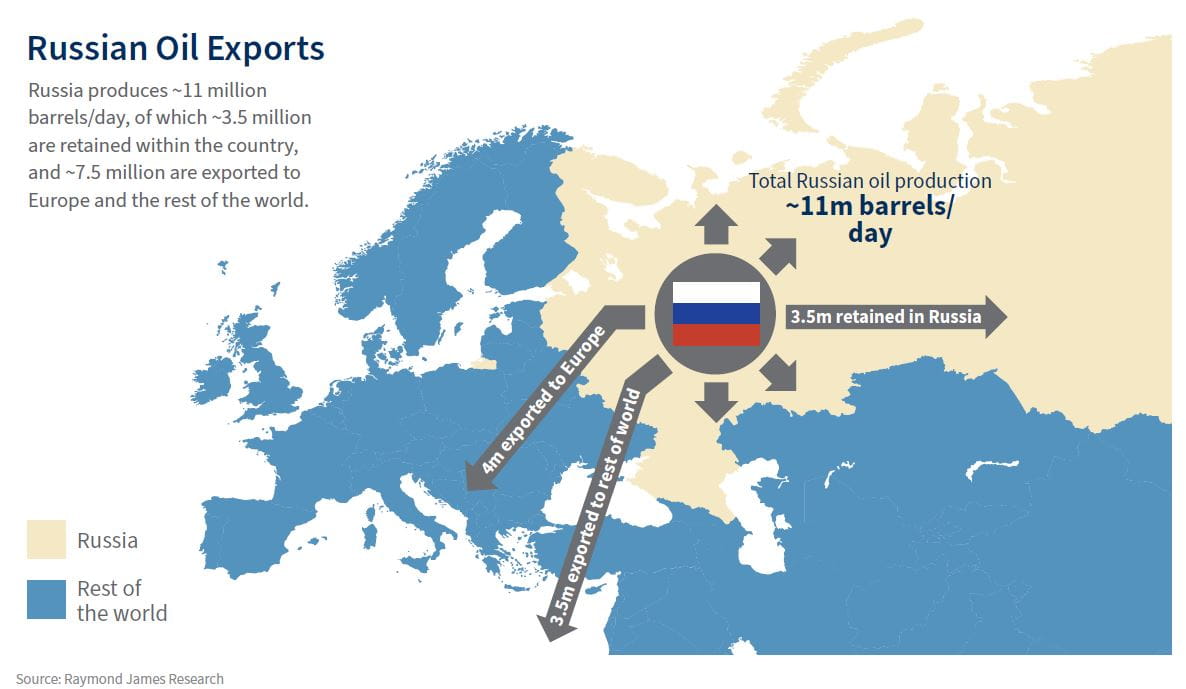 Russia’s natural gas production – three-quarters of which goes to Europe – is even more of a geopolitical hot potato. Thus far during the war, oil and gas pipelines have continued to operate normally. Also thus far, sanctions have had only a peripheral effect on Russia’s energy sector. Germany has made it crystal clear that the Nord Stream 2 gas pipeline – an $11 billion project owned by the Russian gas giant Gazprom – will be blocked from operating for the foreseeable future. The U.S. has imposed an embargo on Russian oil, and the U.K. and Poland plan to do so by year-end 2022, but unless the rest of Europe follows suit, it won’t mean much in practical terms. Separate and distinct from Russia/Ukraine, other geopolitical hotspots that contribute to high oil prices include Libya (the plan to hold a presidential election has broken down); Yemen (the Houthi rebels continue to fire missiles into neighboring countries); and Iran (progress in negotiations toward a new nuclear agreement is uneven, at best).

It is equally true that the underlying oil market fundamentals —good ol’ supply and demand — are as bullish as they have been over the past decade. Our global oil market model points to inventories declining by approximately 2 million bpd in 2022.When inventories are declining, by definition it means that demand is outstripping supply. Demand in 2022 is back to the pre-COVID peak of 100 million bpd. Meanwhile, OPEC has remained very consistent with its roadmap of gradually bringing production back to pre-COVID levels by September 2022. Capital spending by the world’s oil and gas companies is finally recovering from the ultra-austere levels of 2020-2021, but the industry’s commitment to capital discipline is firmly in place. Management teams are accommodating long-standing shareholder demands for less production growth and instead more emphasis on dividends and share repurchases. Even for those companies that are willing to substantially increase capital spending, it will take time for drilling activity to provide a meaningful boost to supply. For North American shale, production uplift will remain muted until2023. For oil-producing regions with mostly long lead time projects, such as Brazil and West Africa, it will take even longer.

The oil industry may be tempted to celebrate that good times are back again, and indeed it is the case that profitability and free cash flow metrics are currently very strong. But high oil prices on a prolonged basis will carry an unavoidable side effect: accelerating the energy transition, away from fossil fuels. Government policies vis-à-vis climate change (such as carbon taxes and petroleum phase-outs) are already pointing consumers and businesses toward low- and zero-emission alternatives. Oil prices at fourteen-year highs are compounding the effect of climate policies, as the economics of electric vehicles look more attractive than they did just a few years ago. As it relates to Europe specifically, there is also the geopolitical urgency of shifting away from Russian oil. The war has dramatically raised the issue of energy security on the agenda across Europe. Germany, whose new coalition government includes the Green Party, is taking the lead: targeting 15 million electric vehicles (EVs) on the road by 2030, which is approximately equivalent to what the entire world currently has. EVs in Germany had a market share of 26% in 2021 (among light-duty auto sales) – the highest of any G20 economy. By comparison, the U.S. was at only5%. If Germany reaches its 2030 EV target, it would have the effect of erasing the need to buy Russian oil ever again. 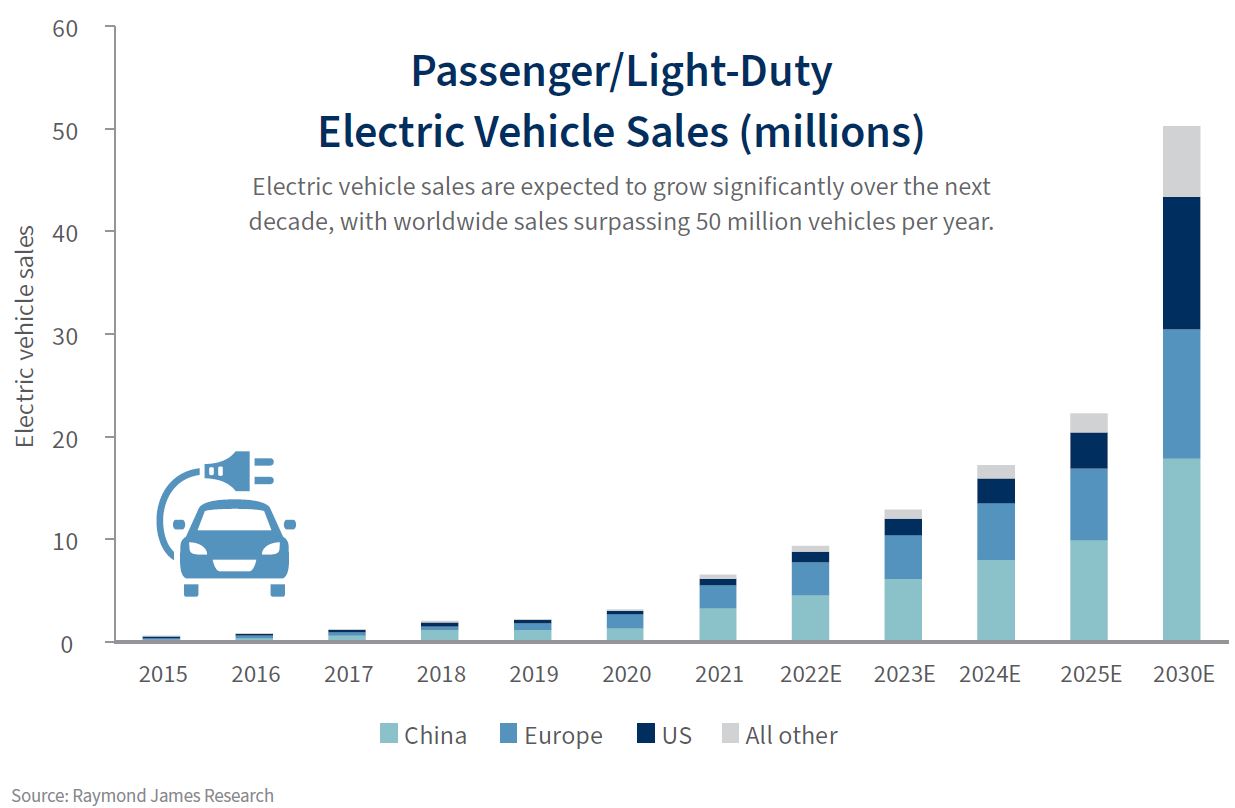 Taking a global perspective, we forecast light-duty EV market share increasing from 8% in 2021 to 25% in 2025 and 50% in2030. Alongside the demand boost from high fuel prices, expansion of consumer appetite for EVs is being driven by the declining cost of lithium-ion batteries, longer range of those batteries, and a broader array of model choices across the price spectrum. Interestingly, though, the adoption curve is progressing more rapidly in buses as compared to the car market. China is the standout leader in electric buses, though Europe and the U.S. are moving in the same direction. Electrification of trucks is at a very early stage, but if it follows the trajectory of buses, this will imply rapid transformation of truck fleets into the second half of this decade. It is worth noting that sustaining rapid growth in EV sales will require an equally aggressive buildout of charging infrastructure, especially the DC ultra-fast chargers that can make itas convenient as filling up a conventional car at a fuel station, i.e., a mere five to ten minutes.

All expressions of opinion reflect the judgment the author, the Investment Strategy Committee, or the Chief Investment Office and are subject to change. Past performance may not be indicative of future results. There is no assurance any of the trends mentioned will continue or forecasts will occur. The performance mentioned does not include fees and charges which would reduce an investor’s return. Dividends are not guaranteed and will fluctuate. Investing involves risk including the possible loss of capital. Asset allocation and diversification do not guarantee a profit nor protect against loss. Investing in certain sectors may involve additional risks and may not be appropriate for all investors. The indexes mentioned are unmanaged and an investment cannot be made directly into them. The S&P 500 is an unmanaged index of 500 widely held securities.

what can we do for you?

Raymond James financial advisors may only conduct business with residents of the states and/or jurisdictions for which they are properly registered. Therefore, a response to a request for information may be delayed. Please note that not all of the investments and services mentioned are available in every state. Investors outside of the United States are subject to securities and tax regulations within their applicable jurisdictions that are not addressed on this site. Contact your local Raymond James office for information and availability.